FACEBOOK UNSEND MESSAGE FEATURE NOW READY TO ROLL OUT
Concerning the news that got to the NaijTecho blog which was based on the fact that the Facebook group will be introducing an unsend message feature in their app. The Update was eariler announced but there was no time frame for the release of the app which would be made available for Android and IOS devices. 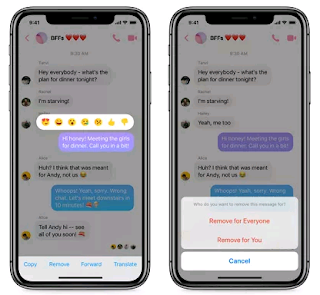 But earlier today, Facebook confirmed that the feature will be rolled out in badges to all the supported devices according to a report made by TechCrunch. The first countries to get this update are Bolivia, Colombia, Poland etc.

If you find yourself in any of these cities mentioned above, i will galdly advise you to update your Facebook app and the unsend message feature should be available for you.

HOW DOES THE FEATURE WORK:

This feature "Unsend Message" give you the ability to unsend any message which you might have sent by mistake. All you have to do is just to hold the message you sent by mistake for about 3 seconds and a pop-up menu should appear containg the  "Remove for everyone option".

You can delete chat, photos, videos, links and more within ten (10) minutes of sending the message. But you should know that Fcaebook won't delete the message immdiately because the message that you want t delete should be reviewed to know if it contains any harrasment of any sort.

Other countries should also be expecting this app update. Especially our brothers in African countries who would be recieving this update in the coming weeks.