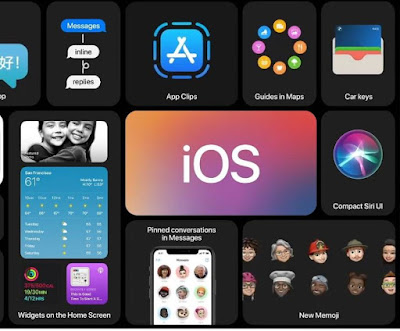 In This post we'll be looking at the update in a detailed fashion as much as possible.

Apple iOS has now changed the Calendar app icon in iOS 14 beta 2 with the day's name now abbreviated to something simpler. For example, Tuesday is now displayed as ‘Tue’'. The Clock icon has also been updated with bolder hour and minute hands. Apple made moving widgets to the home screen possible on iOS 14 which is an interesting feature to be expected.

A good news for iOS users is  that the App Library section which arranges your installed apps for a more cleaner and interesting look on  iOS 14 has received a delete function which means that users can now delete apps from the App Library itself.

The Apple Music app has also got some changes in iOS 14 beta 2 update. Apple has added haptic feedback for the play, pause, next and back buttons on the Apple Music’s ‘Now Playing’ screen. The bottom bar of Apple Music has gone through some nice changes with the ‘For You’ tab being replaced by ‘Listen Now’ text. Apple Music is also showing animated artwork for some artists and there’s an option to disable the animated artwork if you're finding it boring.

Apple iOS 14 Beta update also shows a privacy warning for Wi-Fi networks that don’t use the recommended Private Wi-Fi Address. Another privacy update in iOS 14 beta 2 is Apple showing which apps have accessed the iPhone’s camera or mic in the Control Center: this particular feature helps you identify app that are using your camera and mic without your permission.

For Now, the Apple’s iOS 14 beta is currently available for developers. The public beta version of iOS 14 is also slated to be released during the mid-end of July. As for the stable release of the iOS 14 update, iOS users should expect it around September.