HOW TO CLEAR ANY INFO FACEBOOK TAKES ABOUT YOU FROM OTHER SITES AND APPS
Welcome Reader, Facebook is one of the world's biggest advertising platforms, and that's because it knows a lot about you, me, and everyone. Facebook uses many tools to track people across the Internet, whether they have an account with the social networking site or not, and most of them rely on the online activity data other apps and websites share with Facebook.

Everything we do online generates an extensive amount of behavioral data, from buying clothes to looking for hotels, which apps and websites often share with advertising companies, allowing them to build more accurate profiles of your interests and needs.

Starting on Data Privacy Day 2020, the Off-Facebook Activity feature is now available to every user around the world, which was initially made only available to users in Ireland, South Korea, and Spain for testing.

Initially introduced as "Clear History," the tool offers users a clear summary of what information Facebook holds on you based on other apps you used or websites you've visited and also lets you delete it from your account if you want to. 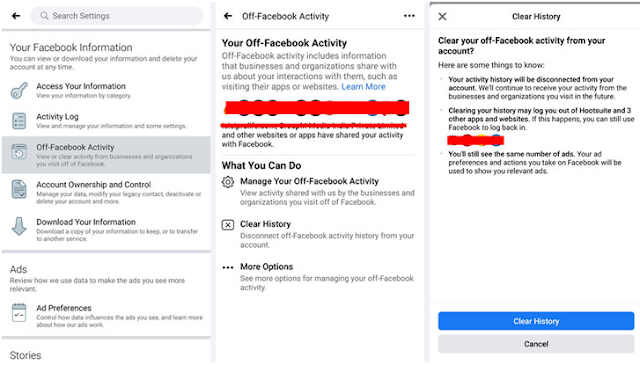 
How to Use Off-Facebook Activity Tool?

However, it's important to note that the feature doesn't actually allow users to delete their browsing information from Facebook servers; instead, it simply lets users dissociate collected data from their Facebook account.

For example, I tried it and found that over 1000 apps and websites had shared my online activity with Facebook in the past 180 days, many of which are news, banking, and healthcare organizations, and even LinkedIn.

It should also be noted that after using the "clear history" option, you will be logged out of certain websites you have accessed using your Facebook account.

Besides this, clearing history doesn't stop third-parties from future data-sharing, and there's another option, called 'Manage Future Activity,' which also doesn't restrict Facebook from receiving your activity data from the businesses in the future. It's just, the new information won't be associated with your account.

Still, it's a remarkable step forward towards transparency and control, as Facebook rivals such as Google don't offer anything comparable to the "Off-Facebook Activity" page.

We would look foward to hearing from you...