Watch Out For The Photo Stealer Apps

WATCH OUT FOR THE PHOTO STEALER APPS
A number of app on the famous app store Google Play Store have been discovered by security experts which had the capabilities of stealing your pictures when you eventually make use of them. 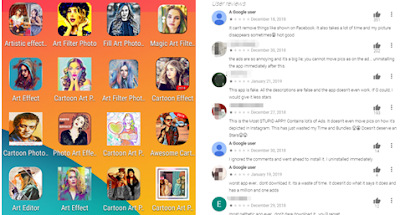 Android users should be aware that not all apps on Google Play Store are geuinue since some of them usaully perform other tasks which violates the Android policy.

Security experts Trend Micro have put out a warning about dozens of such Android apps that were found on the Google Play Store which had hidden agenda's such as the photo stealer apps.

These nefarious Android apps posed as ‘beauty camera’ programs, but held a much more sinister motive.

The malicious apps pushed adverts to android devices displayig fraudulent and pornographic content as well as redirecting the app users to phished websites.

These apps have been downloaded millions of times, and some of them even collected selfies taken on infected android devices which were sent to servers elsewhere.

HOW THE PHOTO STEALER APP WORKS

“Some of these fraudulent apps have already been downloaded millions of times by unsuspecting users thus promoting the activities of the photo-stealer apps given the popularity of these kinds of apps.”

“Further investigation has also led to the discovery of another batch of photo filter-related apps that shared similar behavior like the photo stealer app on Google Play Store.

“These apps  usaully work in an un-suspecting way of allowing users to ‘beautify’ their pictures by uploading them to the designated server".

However, instead of getting an edited photo at last, the user gets a picture with a fake update prompt in nine different languages.

The authors of these malicious apps can collect the photos uploaded in the app, and possibly use them for malicious purposes — for example as fake profile pics on social media or for other sinister motives best known to them.j

These apps has also been know to go stealth mode thereby denying users the priviledge the right to uninstall them by hiding from the application list after getting installed on a particular device.

Trend Micro Mobile Security Company also said a large number of the installs for these malicious apps originated in Asia – particularly in India.

Any app bearing these malicious signatures have now been removed from the Google Play Store.

And please if you're wondering whether you have any of these fraudulent apps on your phone, you're are advised not to download any kind of app you find on the Google play store. Naijtecho's team promises to keep you updated on the names of these malicious apps.